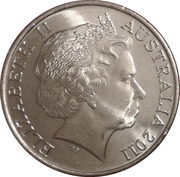 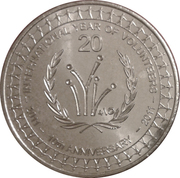 Year of Volunteers Symbol with a +10 next to it. Surrounded by Olive Sheaves on left and right. Around the edge of the coin are 45 people holding hands

This coin was released into general circulation in 2011 by the Royal Australian Mint to celebrate 10th Anniversary of the International Year of Volunteers. 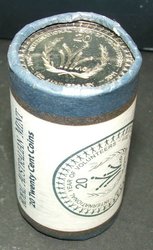 Australia Post released a PNC that contained this coin (20,000 Copies)