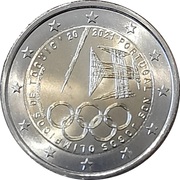 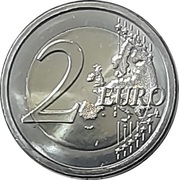 Depicts the official logo of the Olympic Committee of Portugal surrounded b the inscription "Portugal at the 2020 Tokyo Olympics". Engraver's name on the left and mint name on the right. Around the outer ring the 12 stars of the European Union.

This coin commemorates the Tokyo olympic games  originally scheduled to take place between 24 July and 9 August 2020, it was postponed in March 2020 as a result of the COVID-19 pandemic. It is the second time that Tokyo has hosted the Summer Olympic Games, the first being in 1964. It is also the first city in Asia to host the Summer Olympic Games twice, and overall the fourth Olympics to be held in Japan, which also hosted the Winter Olympics in 1972 (Sapporo) and 1998 (Nagano).