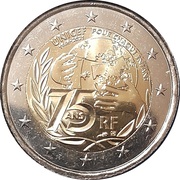 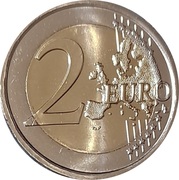 The design shows an allegory of the work of ‘UNICEF’ where the hands are a key element. One after the other they support the globe and are the link between the different areas of the Earth. The mention of the 75th anniversary as well as the laurels crown the ensemble accompanied by the acronym RF. On the upper rim, the name ‘UNICEF’ is inserted along with the relevant dates as well as the UNICEF motto ‘For each child’.
The coin’s outer ring depicts the 12 stars of the European flag.

Translation:
For each child
75 years

A geographical map of Western Europe spans the outer ring and inner core on the right side of the coin. The inscription 2 EURO is superimposed over the map of Europe, with the numeral “2” located in an open field representing the eastern Atlantic Ocean.
12 stars are located on the right side of the outer ring, with six stars atop the map of Europe and six stars below it; six vertical stripes cut across the inner core of the coin, visually connecting the upper and lower star segments.