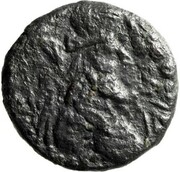 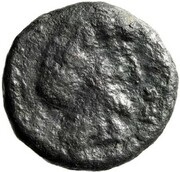 Bust of Maga to right, diademed and draped, with pointed beard, hair in tight curls on top and bunched at sides.

Letterings are in Aramaic script with sometimes a Greek monogram on obverse. Many variants are known and listed in the BMC Arabia pp 304-309.

Characene having been a vassal from Parthian Kingdom, reverse portrait is sometimes presented as being of a Parthian king.

Maga's reign is poorly known but is thought to extend roughly between 195 and 215 AD.

» Buy coins from the Kingdom of Characene