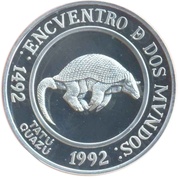 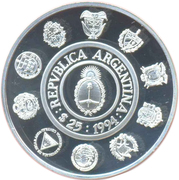 In the central field, he presents the figure of Tatu Guazú, an animal chosen by our country for being one of the most disturbing situation regarding its extinction. The mentioned figure is surrounded by the legend: "ENCVENTRO DE DOS MVNDOS: 1492 TATÚ GUAZÚ 1992".

The reverse shows the nominal value "$ 25", the year of the "1994" coinage, the legend "REPVBLICA ARGENTINA", around the National Coat of Arms and, externally surrounding the legend, the escudos of the remaining countries that make up the ISSUE.

Native animals in danger of extinction

Commemorative coin dedicated to indigenous animals in danger of extinction, which continues the Ibero-American Series of Coins, begun in 1991. This ISSUE is part of a joint venture carried out jointly by Argentina, Cuba, Ecuador, Spain, Guatemala, Mexico , Nicaragua, Peru, Portugal and Uruguay.

Members from this site want to exchange it: maurilp04, Falk173, pgoossen

Bullion value: 20.83 USD Search tips
This value is given for information purpose only. It is based on a price of silver at 834 USD/kg. Numista does not buy or sell coins or metal.