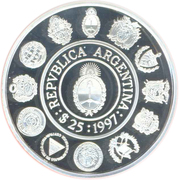 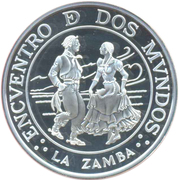 The reverse shows the nominal value "$ 25", the year of the "1997" coinage and the legend "REPVBLICA ARGENTINA", around the National Coat of Arms and, externally, the shields of the remaining countries that make up the ISSUE.

In the central field, you can see the figure of a couple dancing the Zamba, wearing the traditional dress, surrounded by the legend "ENCVENTRO DE DOS MVNDOS:. LA ZAMBA.: ".

The design of this coin, made by the artist of the Central Bank, Carlos P. Rodrguez Dufour, has won first prize for the best design of the Series by direct vote of all participating countries.

Bullion value: 20.73 USD Search tips
This value is given for information purpose only. It is based on a price of silver at 830 USD/kg. Numista does not buy or sell coins or metal.