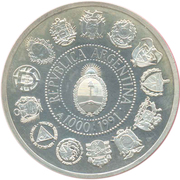 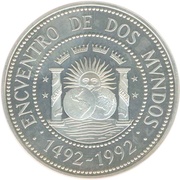 The reverse shows the nominal value "A1000", the year of coinage "1991", the legend "REPVBLICA ARGENTINA", around the National Coat of Arms, and externally surrounding the legend, the shields of the remaining countries that make up the ISSUE.

In the central field, it presents the columns of Hercules in which the legend is read "PLVS VLTRA". Both rest on the "OCEAN SEA", nexus between the two worlds. Over them the sun, four crowns representing the Viceroys of Mexico, New Granada, Peru and Rio de la Plata, and four stars symbolizing the Capitanas Generals of Cuba, Guatemala, Venezuela and Chile. In the upper arch, the legend "ENCVENTRO DE DOS MVNDOS", in the lower one "1492-1992".

V Centennial of the Discovery of America

It is a commemorative coin of the Fifth Centennial of the Discovery of America that is part of a joint venture between Argentina, Bolivia, Brazil, Chile, Colombia, Cuba, Ecuador, Spain, Mexico, Nicaragua, Peru, Portugal, Uruguay and Venezuela.

A member of this site wants to exchange it: Leandroberenguer

Bullion value: 22.16 USD Search tips
This value is given for information purpose only. It is based on a price of silver at 887 USD/kg. Numista does not buy or sell coins or metal.