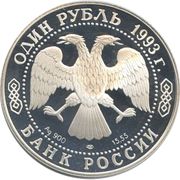 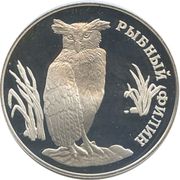 In the center — the Emblem of the Bank of Russia (the two headed eagle designed by I.Bilibin), the letters under it indicate the metal sign, the fineness, the mint trademark and the fine metal content. The inscriptions along the rim framed by a circle of dots: at the top — «ОДИН РУБЛЬ 1993 г.» (ONE RUBLE 1993), at the bottom — "БАНК РОССИИ" (BANK OF RUSSIA).

A fish eagle-owl with sea-weeds in the background, to the right - the inscription along the rim "РЫБНЫЙ ФИЛИН" (FISH EAGLE-OWL).

The fish eagle-owl - a unique representative of the family found wild in Russia. Nearly extinct, it is found on a narrow strip of the coast of the Sea of Okhotsk, stretching to the north up to Magadan, the Khabarovsk and Maritime Territory, Sakhalin and the South Kurile Islands. The fish eagle-owl has been included in the convention on international trade in endangered species.

Bullion value: USD 11.15 Search tips
This value is given for information purpose only. It is based on a price of silver at 710 USD/kg. Numista does not buy or sell coins or metal.