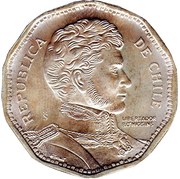 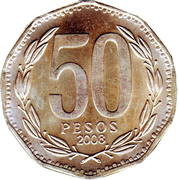 Portrait of Bernardo O'Higgins to the right

Translation:
Republic of Chile
So
Liberator
B. O'Higgins
R. Thenot

The value within a laurel wreath

Variants can be found as illustrated below.

After 2008, there seem to be varieties concerning the lettering on the lower left shoulder parts on the obverse, as it seems there was no lettering prior.