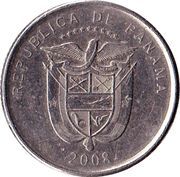 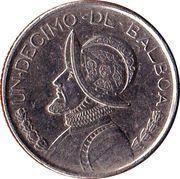 Translation:
Republic of Panama
For the Benefit of the World
2008

Translation: One-Tenth of a Balboa

Balboa was a Spaniard, first European who crossed the Isthmus, reached the Pacific by land and discovered the Perlas Archipelago (1513). The 9 stars represent the 9 provinces of the country at that time (there are now 10).