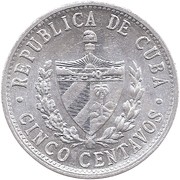 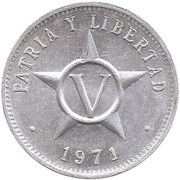 Cuba coat of arms within a laurel wreath 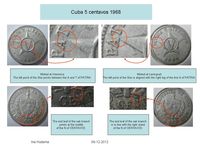 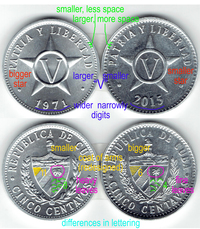 2002 variants: High date on left, low date on right, distance from date to edge is different.
(source: pictures by adanieluy)

On 2016 legend was changed from "PATRIA Y LIBERTAD" to "PATRIA O MUERTE",  this legend have been changed on 1 and 2 centavos coins on 1983, and on 20 and 40 centavos on 1982, but remained unchanged on 5 centavos value.
UPDATE: For  a new "PATRIA O MUERTE" modification  the left point of the star points on the left leg of the A