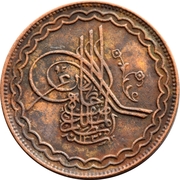 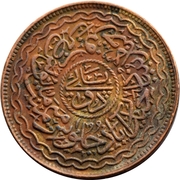 Translation:
92 is the numerical representation of the word 'Muhammad'
Nizam Asaf Jah, (AH) 1330

- Weight varies 3.5 - 3.9gm
- His Exalted Highness Nizam Sir Mir Osman Ali Khan Siddiqi Asaf Jah VII , born Mir Osman Ali Khan Bahadur , was the last Nizam (or ruler) of the Princely State of Hyderabad and of Berar. He ruled Hyderabad between 1911 and 1948, until it was annexed by India.
Later he was made the Rajpramukh of Hyderabad State on 26 January 1950 and continued until 31 October 1956, after which the state was partitioned on a linguistic basis and became part of Andhra Pradesh, Karnataka and Maharashtra.
During his days as Nizam, he was reputed to be the richest man in the world, having a fortune estimated at US $2 billion in the early 1940s ($33.8 billion today) or 2 per cent of the US economy then. At that time the treasury of the newly independent Union government of India reported annual revenue of US $1 billion only. He was portrayed on the cover of TIME magazine on 22 February 1937, described as the world's richest man. The Nizam is widely believed to have remained as the richest man in South Asia until his death in 1967, though his fortunes fell to US$1 billion by then and became a subject of multiple legal disputes between bitterly fighting rival descendants.

» Buy coins from the Princely state of Hyderabad at eBay