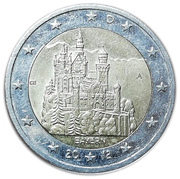 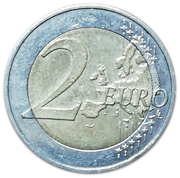 The commemorative ‘Bavaria’ was designed by Erich Ott and shows the most famous view of Neuschwanstein Castle. The design shows the view from the east as visitors see it during their ascent to the castle, with the gatehouse in the foreground and the medieval-style towers and turrets. The panoramic mountain situated behind the castle is well captured, as the site of the castle on a cliff overlooking the romantic Pöllatschlucht. The name ‘BAYERN’ links the depicted construction ‘Neuschwanstein Castle’ with the state. The mintmark of the respective mint (A, D, F, G or J) is located in the right central core area and the initials of the artist in the left central core area.

The coin’s outer ring depicts the 12 stars of the European Union flag. Between the stars, at the bottom, the year ‘2012’ and at the top the indication of the issuing country ‘D’.