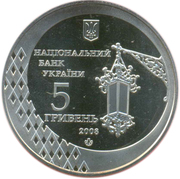 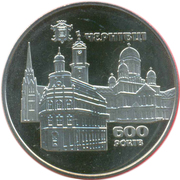 600 Years of the city of Chernivtsi

There is a depiction of a fret lantern (on the right), one of the symbols of the city, a fragment of the conventionalized ornament (on the left), which decorates the roof of Chernivtsi university and above there are: the small National Emblem of Ukraine and inscriptions: НАЦІОНАЛЬНИЙ/ БАНК/ УКРАЇНИ/ 5/ ГРИВЕНЬ/ 2008 (National Bank of Ukraine/ 5/ Hryvnia/ 2008) and the NBU Mint logotype.

There is depicted a composition made of the outstanding historical and architectural monuments of the city and the inscription: ЧЕРНІВЦІ (Chernivtsi), beneath - 600/ років (600/ years).

The coin is dedicated to the city of Chernivtsi, an administrative, economic and cultural center, one of picturesque cities of Ukraine, which is located on both banks of the river Prut in the foothills of the Carpathian Mountains. The first written mention of Chernivtsi was found in the charter of a Moldavian landlord Oleksander Dobryi in 1408, though according to archaeological data this settlement above the river Prut was founded much earlier.

» Buy coins from Ukraine at eBay