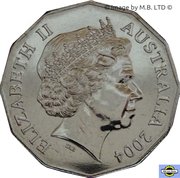 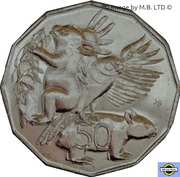 Depiction of a Koala, Wombat, Lorikeet and the initials JS
Denomination superimposed

This coin was issued into general circulation by the RAM in 2004. It was designed by 12 year old John Serrano, a year 5 student at St Peter's Primary School in East Keilor Victoria. John was the winner of the Mint's Primary School Student Coin Design Competition of which there were just under 2,600 entries. The theme for the design was "Australia". It was the public who determined the winner by voting on the RAM website.

The coin was also released in uncirculated condition in a small coincard. 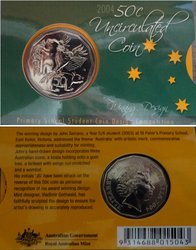 A Fine Silver (.999) Proof version of the coin was also released in a capsule in a plush yellow box with limited edition certificate. (Mintage 8,203)