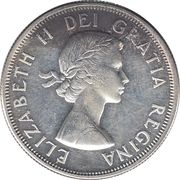 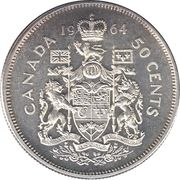 Bust of Queen Elizabeth II, as at 27 years of age, wearing a wreath, facing right.

Translation:
Elizabeth II Queen by the grace of God

Crown divides the date above the Royal Arms of Canada proclaimed by King George V on November 21, 1921, and updated in 1957, are surrounded with the face value and the inscription "CANADA"

Thomas Shingles, born 1903 in Birmingham and died 1984, was the Master Engraver of the Royal Canadian Mint from 1943 until his retirement. Shingles was responsible for several of the images on Canadian coinage, including the Second World War V-variant nickel, which he designed in 1943 at the behest of Mint staff. Although most coin designs are done at full size and then reduced via a pantograph, Shingles chose to produce this design in miniature. Other designs by Shingles include the 1959 updating of the 50 cent piece to include the Canadian coat of arms. He also designed the majority of Canadian commemorative coinage during his tenure as Master Engraver. Shingles retired from the Mint in 1965, but continued to work as a freelance artist. In 1970, he won a contest to design the 1971 Canadian dollar coin.

This value is given for information purpose only. It is based on a price of silver at 720 USD/kg. Numista does not buy or sell coins or metal.