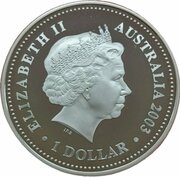 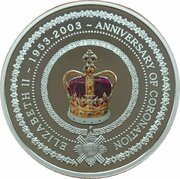 Coloured image of St Edwards Crown surrounded by a decorative border and a representation of the breast star of the Order of the Thistle.

Issued by the Perth Mint to commemorate the 50th anniversary of the coronation of Queen Elizabeth II.

A member of this site wants to exchange it: Andrey78

Bullion value: 26.38 USD Search tips
This value is given for information purpose only. It is based on a price of silver at 835 USD/kg. Numista does not buy or sell coins or metal.