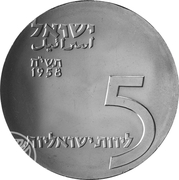 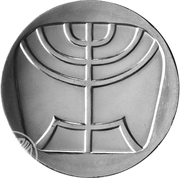 In the upper left corner the word "Israel" in Hebrew and Arabic with the mint year "5718-1958". Below is the face value of "5 Israeli Lirot" in Hebrew.

In an incuse trapezoid with rounded edges appears a stylized seven-branched Menorah.

Around it appears the legend "10th Year of the State of Israel" facing the obverse or the reverse side.

Translation: Year Ten of the State of Israel

The seven-branched Menorah, among the best known symbols of Judaism^ is also a well-known numismatic symbol in Jewish history. It was found on coins from the period of the rule of Mattathias Antigonus, the last of the Hasmoneans. After the destruction of the Second Temple the Romans pillaged all the sacred vessels. The pictorial replica of the seven-branched Menorah which was in the Temple, was preversed in a relief in the Titus Arch in Rome. The State of Israel adopted that Menorah as its national emblem, symbolic of a return to the glory of ancient days.

Bullion value: 12.92 USD Search tips
This value is given for information purpose only. It is based on a price of silver at 574 USD/kg. Numista does not buy or sell coins or metal.