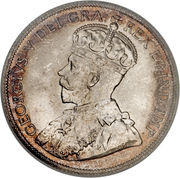 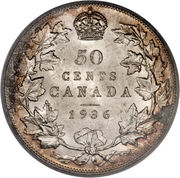 The portrait in left profile of George V is surrounded with the inscription "GEORGIVS V DEI GRA: REX ET IND: IMP" (George V, King and Emperor of India by the grace of God)

The face value, the inscription "CANADA", and the date are surrounded with two maple boughs and a crown.

According to the Charlton Standard Catalogue of Canadian Coins, 69th ed. (2015) p. 184, 206,398 pieces dated 1921 were coined. Because there was a very low demand for the 50¢ denomination between 1921 and 1928, virtually none (if any) was put into circulation. Almost all were melted and recoined in 1929 when the demand for 50¢ increased. It is estimated that only about 75 pieces dated 1921 survived because they were inserted in specimen sets or were circulation strikes sold to Mint visitors. 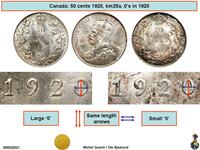 Bullion value: USD 6.76 Search tips
This value is given for information purpose only. It is based on a price of silver at 725 USD/kg. Numista does not buy or sell coins or metal.