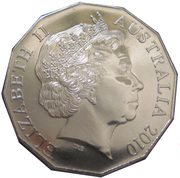 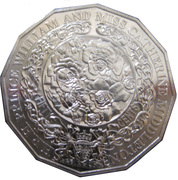 Prince William and Miss Catherine Middleton announced their engagement on November 16th 2010 and soon after it was revealed that the Royal Australian Mint would strike official coins to celebrate the engagement of the happy couple and their upcoming marriage. This 50 cent coin was issued in a coincard as NCLT (Non-Circulating Legal Tender).

A Fine Silver (.999) Gilt Proof version of the coin was also issued in a 2 coin set in a wooden box.