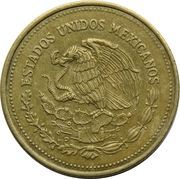 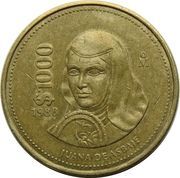 The national emblem of Mexico depicting a Mexican golden eagle perched on a prickly pear cactus devouring a snake above a half-wreath of oak and laurel below and the legend forming the upper semicircle.