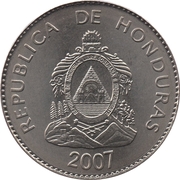 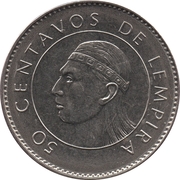 Coat of Arms of Honduras, state name in full, and year of issue.

Portrait of Lempira (without feathers) facing left within the circle, and denomination.

Translation: 50 Centavos of a Lempira

Lempira, the present currency of Honduras, was introduced in 1931 replacing the Peso. The Lempira is divided into 100 Centavos.

The currency is named after Lempira, a chieftain of the indigenous Lenca people, who waged war against Spanish occupation of the country during 16th century. He is revered as a national hero.

The image on the reverse of this coin is of Lempira.