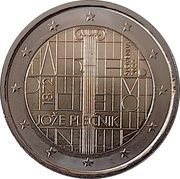 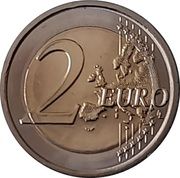 150th anniversary of the birth of architect Jože Plečnik

The large reading room window in the National and University Library in Ljubljana, with a column in front of it. The composition of signs A R H. P L E Č N I K is built into the window space and is a metaphor for the architect’s signature.

Inscribed with Slovenia in Slovene.

» Buy coins from Slovenia at eBay