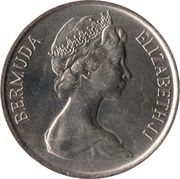 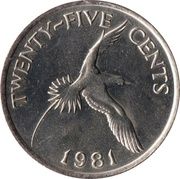 White-tailed Tropic bird in flight, denomination above, date below.

The species that occurs in Bermuda, Phaethon lepturus catsbyii is the Western Atlantic sub-species of Phaethon lepturus, which is globally distributed. Threatened by introduced predators and habitat destruction, it is currently actively protected.