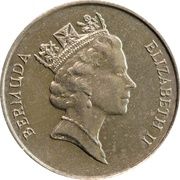 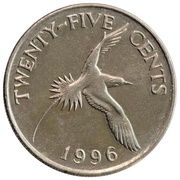 Queen Elizabeth II facing right with the country name to the left.