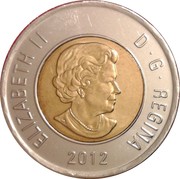 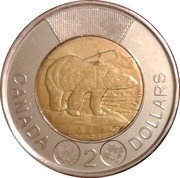 The Royal Canadian Mint's 2017 annual report stated a mintage of 24,465,000 for regular circulating 2017 coins, even though the circulating coins for that year only bore the Canada 150 commemorative design (which has a different mintage listed). However, starting in 2017, the annual report omitted the 'Coins struck dated 2017' table, meaning the 24,465,000 coins were probably dated either 2016 or 2018, even though they were struck in 2017.

In 2012 2 dollar piece started to be struck with security marks. They are the maple leaves in the circles on the reverse.