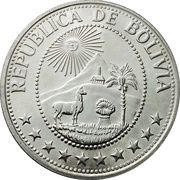 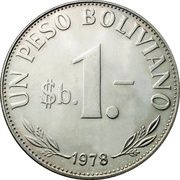 Emblem of Bolivia (the sun, two mountains (the Cerro Rico and the Cerro Menor), a chapel, a palm tree and a lama), ten stars below for the ten departments that existed before the war with Chile.

The letters on obverse of the 1968 coin are closer to the rim compared to the 1974 coin.

IMPORTANT NOTICE: On Krause catalog shows as minted on 1970 and 1973, with mintage figures, but Bolivian Central Bank mentions only was minted on 1968, 1969, 1972, 1974, 1978 and 1980. After investigation, results were the users who replied the request, informed they had the wrong date registered. Is very possible some users just checked the year without taking special care to the date, and others (users who collect by type, not by year and/or variant) just click on all years, so they get the double check on page.

A possible explanation may be 1969 & 1972 coins were produced on the next year (1970 & 1973), or production ended at start of next year, but showing dates specified on the Bolivian order. Minthouse usually publish the amounts by year of production, not as the date showing on coin, so this is the reason Krause lists mintage. On the other hand, they must have seen 1969 & 1972 coins, so they added them, but without mintage quantity.

Year lines are not being modified, as we don't have a final confirmation.

» Buy coins from Bolivia at eBay