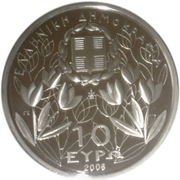 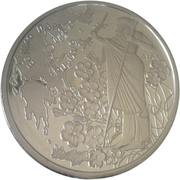 The National Emblem Of Greece between flowers is depicted. On the top edge ‘Hellenic Republic’ is written in the Greek Alphabet. The face value of the coin is displayed along the lower edge.

King of the Olympian Gods Zeus (Dias in Greek) over a flower background, overseeing the map of Greece.

In Greek mythology, Zeus was the son of Cronus and Rhea and the highest-ranking god among the Olympian Gods. He was god of the sky and thunder and his attributes included thunder, the lightning bolt, the septer, and the eagle. Zeus (in Greek Dias) was the ruler of Mount Olympus, the highest mountain in Greece and the home of the gods. In 1981 UNESCO declared Mount Olympus an “International Biosphere Reserve” and in 1987 it was declared a National Park of Greece.

A member of this site wants to exchange it: numis13006

Bullion value: 22.95 USD Search tips
This value is given for information purpose only. It is based on a price of silver at 730 USD/kg. Numista does not buy or sell coins or metal.