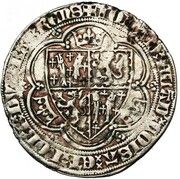 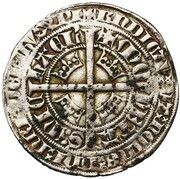 Shield with quartered arms of Bar-Flanders flanked by three crowns, inside a hexalobe.

Translation: Yolanda of Flanders, Countess and Robert, Duke of Bar.

Cross pattée with crown in each angle.

Translation:
Blessed be the name of our lord God Jesus Christ.
Coin of Saint-Mihiel.

Yolanda of Flanders (of the house of Dampierre) married Henry IV, Count of Bar in 1338, and bore him two sons, Edward and Robert.
When Henry died in 1344, his elder son Edward was only 4 years old, so Yolanda served as regent until his minority ended in 1349.

Unfortunately Edward also died prematurely in 1352.  Yolanda served briefly as regent a second time on behalf of her second son (1352-1353) , and was asked by Robert to assume certain duties again on his behalf in 1357-1358.

This coin can be dated to this third regency, as Bar was elevated to a duchy in 1354, and Robert bears the title DVX on this coin.