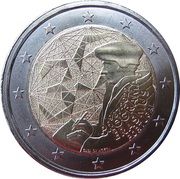 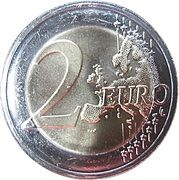 35 Years of the Erasmus Programme.

The design is a mix of two major elements of the Erasmus programme: the original intellectual inspiration, Erasmus himself, and the allegory of its influence over Europe. The first one is symbolised by one of the most known depiction of Erasmus. The second one is symbolised by a beam of links going across the coin from a beacon to another, representing the numerous intellectual and human exchanges between the European students. As a reference to Europe, some of these links form other stars, born from the synergy between the countries. The figure 35, for 35th anniversary comes out from the stars in a contemporary graphical style.
The outer ring depicts the twelve stars of the European flag. 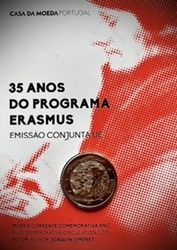 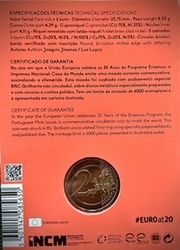