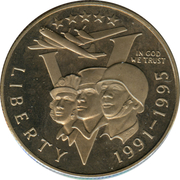 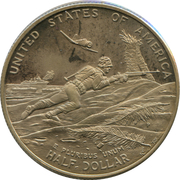 A soldier, sailor, and airman looking upwards. A B-17 bomber flies overhead and a “V” for victory is in the background.

A battle scene from the Pacific Islands.

Translation:
United States of America
Out of Many, One
Half Dollar

The 1991-1995 World War II Half Dollar was minted and issued in 1993 to commemorate the 50th anniversary of America’s involvement in World War II. The commemorative coin program included three different coins, a clad half dollar, silver dollar, and $5 gold coin. While the program was expected to achieve popularity with a broad audience, the sales levels remained in line with other recent commemorative coin programs.

The 1993 World War II Half Dollar was issued in uncirculated or proof versions, both minted at Philadelphia. The half dollar was sold individually, or as part of a two-coin, three-coin, and six-coin set. 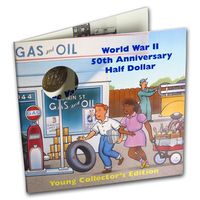 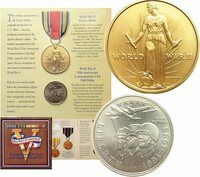