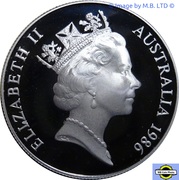 Coat of Arms of South Australia:
A Grassy Mount with Vines, Wheat and Barley Stalks, Citrus Fruits, two Cogs & Miners Pick.
A Blue Shield with an Australian Piping Shrike inside a Gold circle. A Crest of four Sturt's Desert Peas. 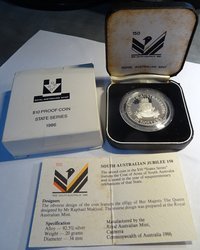 Uncirculated versions were also released in a black vinyl wallet.

This 1986 $10 coin is the second of a series which features the coat of arms of the individual States and Territories of the Commonwealth of Australia. This year, 1986, marks the sesquicentenary of the State of South Australia. The coin reflects this event by featuring the official South Australian Coat of Arms.

Bullion value: 15.37 USD Search tips
This value is given for information purpose only. It is based on a price of silver at 831 USD/kg. Numista does not buy or sell coins or metal.