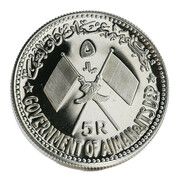 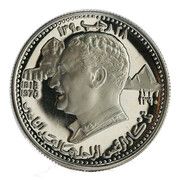 Translation:
Government of Ajman and its dependencies
5 Riyals

Head of President Gamal Abdel Nasser facing left in the center, with the Sphinx to the left and pyramids to the right. 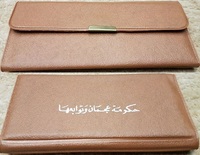 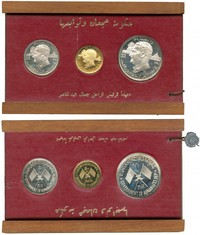 Gamal Abdel Nasser Hussein was the second President of Egypt, serving from 1956 until his death in 1970. Nasser led the 1952 overthrow of the monarchy and introduced far-reaching land reforms the following year.

This value is given for information purpose only. It is based on a price of silver at 724 USD/kg. Numista does not buy or sell coins or metal.

» Buy coins from Ajman at eBay