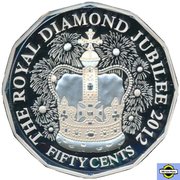 St Edwards Crown worn by her majesty during her coronation ceremony. Also showing diamonds and fireworks

The coin was also issued in a joint three coin Commonwealth Mints Set (Australia, Canada & the United Kingdom). The other coins were a Silver Canadian $20 and a Silver UK £5. (Mintage 4,000)

A Copper-nickel version of the coin was released in a Coincard and an Australia Post PNC.

Bullion value: 16.37 USD Search tips
This value is given for information purpose only. It is based on a price of silver at 899 USD/kg. Numista does not buy or sell coins or metal.