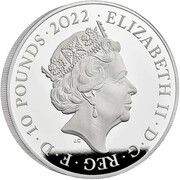 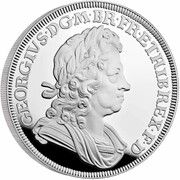 Laureate and draped portrait of King George I right, legend around.

Translation: George I by the Grace of God King of Great Britain France and Ireland Defender of the Faith

John Croker, born in Saxony and known in his youth as Johann Crocker, was a master jeweller who migrated to London, where he became a medallist and engraved dies for English and later British coins and medals.

The third issue in 5-year series, the British Monarchs, there will be a total of 21 monarchs, featuring iconic kings and queens from four royal houses: Tudor, Stuart, Hanover and Windsor, formerly known as Saxe-Coburg-Gotha.

This release features a classic coinage portrait of George I that appeared on Hanoverian coinage; the design was struck in a variety of precious metal compositions and denominations. Issue limit: 281. 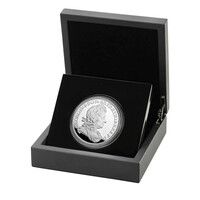