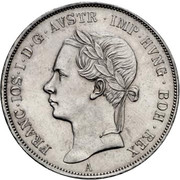 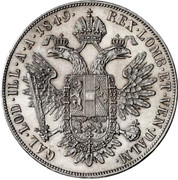 Translation: Franz Joseph I, by the grace of God, Austrian Emperor, King of Hungary, Bohemia

All dates of these coins were minted in 1852 based on the draft of the main mintmaster Johann Ritter von  Hassenbauer to commemorate the first dates of ruling of Franz Joseph. Originally ,only 12 pieces of every date and nominal were minted, two months later were minted another 10 pieces of every date and nominal (see Cubasch p. 21). One month later, there was another demand for the delivery of  unspecified number of coins for public and church collections, the fulfillment of which was not confirmed.
These coins were not intended for circulation but for representative purposes, and were distributed to senior state officials, devoted to state, church and several private collections. One piece of each date was given to emperor’s hands.
Interesting is the thaler of 1852 from the Vienna mint (this sheet), which was minted on April 14th 1852 as a pattern strike, in number of only 10 pieces. The title of dalmatian king was omitted in the inscription. Based on the instructions of the emperor, the title was added in the next dates (1848 – 1851). The Emperor however was not satisfied with the portrait to the left, so he was portrayed from the right at all later thalers.

Bullion value: 13.28 USD Search tips
This value is given for information purpose only. It is based on a price of silver at 569 USD/kg. Numista does not buy or sell coins or metal.