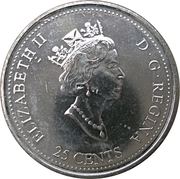 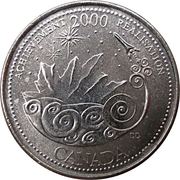 The entry into the third millennium series - Achievement

A design on the theme of achievement, with a reference to space conquest, is surrounded with the bilingual inscriptions "CANADA" and "ACHIEVEMENT 2000 RÉALISATION." This coin was the March edition in a set of millennium coins released during the year 2000.