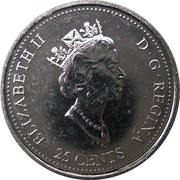 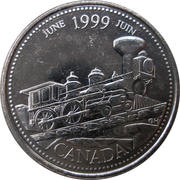 A design entitled "From Coast to Coast" shows a steam locomotive from the 20th century on the Canadian Pacific Railway, surrounded with the inscription "CANADA" and the bilingual date: "JUNE 1999 JUIN"