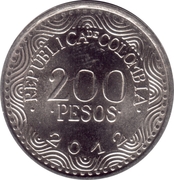 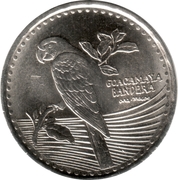 Central denomination, above name of the country, below the date, surrounded by an undulated motive.

Scarlet macaw (Ara macao) on a tree branch to the left. Local and Latin name on the right. The bird is native to humid forests of Central America and to the North of South America.