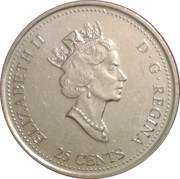 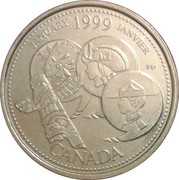 A design entitled "A Country Unfolds" shows the evolution of Canada through four scenes, which form the number 1999 : a totem, an indigenous wearing a feather hat, a settler and RCMP officer, all surrounded with the inscription "CANADA" and the bilingual date: "January 1999"