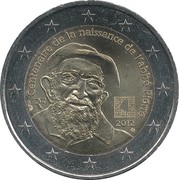 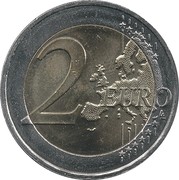 The inner part of the coin shows a portrait of Abbé Pierre wearing his well-known beret, positioned slightly off-centre to the left, and the logo of the foundation that bears his name to the right, including micro-lettering with the question “Et les autres?”, his favourite words to remind us that we should never forget to help others. The inscription “Centenaire de la naissance de l’abbé Pierre” forms an arch around the portrait along the edge of the coin’s inner part, flanked by the horn of plenty (mintmark of Monnaie de Paris) and the letters “RF” to denote the issuing country on the left and the “fleurette” (hallmark of the engraving workshop) on the right. The coin’s outer ring bears the 12 stars of the European Union.