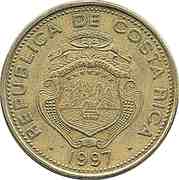 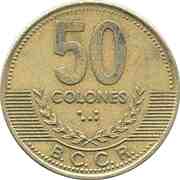 The arms of Costa Rica (seven stars representing the seven provinces, three smoking volcanoes for the three mountain ranges, two ships symbolizing the country's geographical situation between the Atlantic and Pacific ocean and sunrise on the left)

The size and space between letters on the obverse varies year by year in addition to the outer rim of the Coat of Arms.