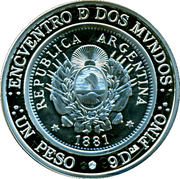 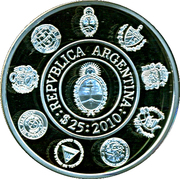 In the central imprint, the replica of the obverse of the "patacón", consisting of a shield flanked on both sides by a total of 14 flags symbolizing the provincial division of that moment, two branches of laurel joined at the base by a ribbon , Two cannons and inscriptions REPUBLICA ARGENTINA and 1881. In the upper arch reads the symbol that symbolizes the spirit that gave rise to the Ibero-American Series "ENCVENTRO DE DOS MUNDOS" and in the lower arch "UN PESO - 9 DOS FINO", Inscriptions on the back of the "patacón" referring to the denomination and the purity of the metal.

The Argentine National Coat of Arms is distinguished by the inscription "REPVBLICA ARGENTINA", the face value "$ 25" and the year of "2010". Surrounding our emblem, the shields of all participating countries.

The central bank of the Argentine Republic chose as a motive for this series the reproduction of the obverse of the first national silver coin of $ 1, coined as of 1881, by virtue of Law No. 1130 sanctioned for the purposes of unification Of the country's monetary system. This piece was popularly called "patacón", a colloquial form with which it was denominated to the Hispanic-American colonial currencies of similar characteristics.

Bullion value: 21.65 USD Search tips
This value is given for information purpose only. It is based on a price of silver at 867 USD/kg. Numista does not buy or sell coins or metal.