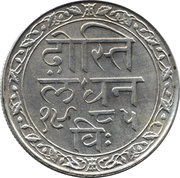 Mewar or Mewāḍ is a region of south-central Rajasthan state in western India. It includes the present-day districts of Bhilwara, Chittorgarh, Rajsamand, Udaipur, Pirawa Tehsil of Jhalawar District of Rajasthan, Neemuch and Mandsaur of Madhya Pradesh and some parts of Gujarat. For centuries, the region was ruled by Rajputs. The princely state of Udaipur emerged as an administrative unit during the period of British East India Company governance in India-ruled and remained until the end of the British Raj era. The Mewar region lies between the Aravali Range to the northwest, Ajmer to the north, Gujarat and the Vagad region of Rajasthan to the south, the Malwa region of Madhya Pradesh state to the southeast and the Hadoti region of Rajasthan to the east.

8 million pieces were struck in Calcutta in 1931.

» Buy coins from the Princely state of Mewar at eBay