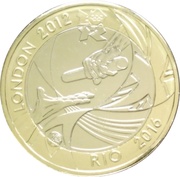 A baton being passed between two hands above flags of the UK and Brazil and below the London 2012 logo.

Lettering: I CALL UPON THE YOUTH OF THE WORLD