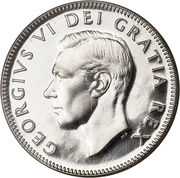 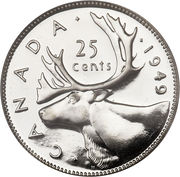 Translation:
George VI, King by the grace of God).

A caribou is accompanied with the face value and surrounded with the inscription "CANADA".

Notice that the Bluenose was also considered for the 25 cents coin. It was finally chosen for the 10 cents.

In an attempt to improve the appearance of the obverse on this coin, a slightly larger, lower relief portrait was developed and used on the coins from 1951-1952. The two varieties, High Relief (HR) and Low Relief (LR) can be distinguished by looking at where the 'A' in 'GRATIA' points:

Recently, the LR for 1951 has been found to have only been issued for Prooflike coins and NOT for circulation ones. 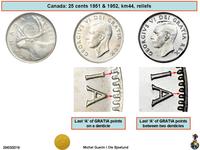