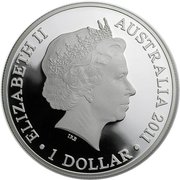 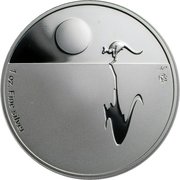 Kangaroo leaping left with elongated reflection below. Depiction of the Sun to the left.

The Royal Australian Mint released this Kangaroo at Sunset series in 2009. Both Proof and UNC Reverse Frosted coins were issued from 2009 to 2015. After that only Proof coins were issued. These coins are separate from the normal Yearly Silver Kangaroo issue released by the RAM.
(Some coins have privy marks on them)