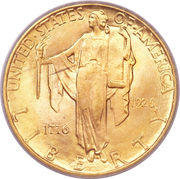 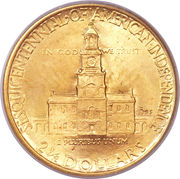 Liberty standing on a portion of the globe. She holds a scroll in one hand representing the Declaration of Independence and a lit torch in the other.

The 1926 Sesquicentennial Quarter Eagle had a maximum authorized mintage of 200,000 coins and were sold at a price of $4 each. The US Mint struck the entire authorized mintage, but ended up melting more than three quarters of the coins after they failed to sell. Despite the importance of the anniversary, the coins failed to generate significant interest from the public.

Notably, this would represent the last of the early commemorative coins struck in gold. All remaining issues of the series would take the form of the silver half dollar.

Bullion value: USD 215.76 Search tips
This value is given for information purpose only. It is based on a price of gold at 57 354 USD/kg. Numista does not buy or sell coins or metal.