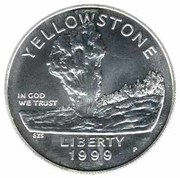 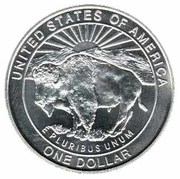 One of the geysers of the park. This is not identified as the famous “Old Faithful” since the landscape is different.

The coin’s reverse is adapted from the seal of the Department of the Interior.

The Yellowstone Silver Dollars were produced at the Philadelphia Mint in proof and uncirculated formats. The coins were sold individually, or as a two coin set. Pricing initially reflected a pre-issue discount, after which point regular pricing went into effect. On a combined basis, the US Mint sold just over 50% of the maximum authorized mintage of 500,000 coins. The sales period was from July 16, 1999 to July 15, 2000.

Seal of the Department of the Interior.

A member of this site wants to exchange it: geostring

Bullion value: USD 15.01 Search tips
This value is given for information purpose only. It is based on a price of silver at 624 USD/kg. Numista does not buy or sell coins or metal.