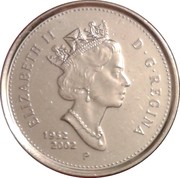 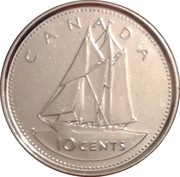 50th anniversary of the succession of Elizabeth II to the throne

Translation:
Elizabeth II, Queen by the grace of God
P

The Bluenose under sail, a Canadian schooner from Nova Scotia, a celebrated racing ship and a symbol of the province surrounded by the the value and the country name